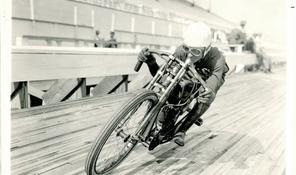 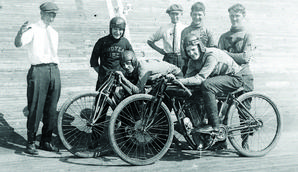 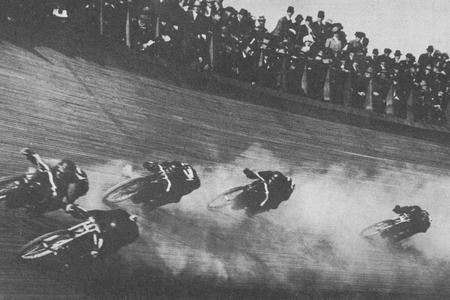 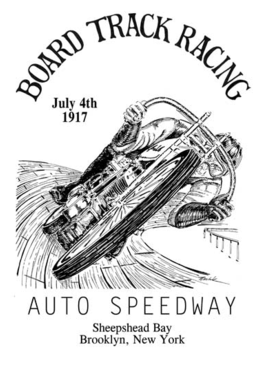 Board track racing was a type of motorsport popular in the United States during the 1910s and 1920s. Competition was conducted on circular or oval race courses with surfaces composed of wooden planks. This type of track was first used for motorcycle competition, wherein they were called motordromes, before being adapted for use by various different types of racing cars. The majority of the American national championship races were contested at such venues during the 1920s.  (Wikipedia.org)

Interest in motorsport was exploding during this period and by 1929, at least 24 board tracks had been built around the country, although by 1931, 20 of the 24 had been shut-down or abandoned, and from 1932 on there were no more championship-level races run on boards. The tracks were relatively inexpensive to construct compared to more permanent facilities - the total facility cost of the 2-mile (3.2 km) Tacoma Speedway was just $100,000 in 1915, compared to the $700,000 spent in 1909 just to pave the 2.5-mile (4.0 km) Indianapolis Motor Speedway.  (Wikipedia.org)

The first board track for motor racing was the circular Los Angeles Motordrome, built in 1910 in the area that would later become the city's Playa del Rey district.[1] Based on the same technology as European velodromes used for bicycle racing, this track and others like it were constructed with 2-inch (51 mm) x 4-inch (100 mm) boards, often with turns banked at up to 45 degrees. In some cases, such as the track at Culver City, banking was 50 degrees or more. Longer tracks were later built - some up to 2 miles (3.2 km) long by 1915 - and lap speeds exceeding 100 miles per hour became commonplace(Wikipedia.org)